The Run For a A Million

And the winner is ……… Reining

In an event that was Reining’s answer to the Oscars, 12 of the NRHA’s finest and their magnificent horses were thrust into the spotlight and have brought a plethora of adoring fans to our sport. The owners and riders might be taking home the prize money but the ultimate winner is Reining and the juggernaut it stands to be on the back of the success of ‘Yellowstone’ and it’s spin off reality program ‘The Last Cowboy’ thanks to the vision of producer Taylor Sheridan.

So, how does that have anything to with the Performance Horse industry, particularly Reining? Simple, eyeballs and lots of them! A modern-day Western created by Taylor Sheridan, Yellowstone featured Reining horses such as Lil Joe Cash. Romanticism for the Western lifestyle was reignited. It went on to spawn ‘The Last Cowboy’ reality show that delivered a handful of the Reining world’s champions directly into millions of lounge rooms around the world. With a beguiling mix of drama, suspense and cinematographic flare, ‘The Last Cowboy’ presented the sport and lifestyle of Reining to a whole new audience and many liked what they saw.

Sliding stops, lightening turnarounds, dynamic roll backs and the never-ending pursuit of willingly guided excellence is a potent inducement for anyone with a hint of interest in equine or western pursuits. The bait was masterfully cast and using the universal language of money, the final stroke of genius was added …… One Million Dollars prize money.

Enter two decades of marketing and event management experience from Amada Brumely and the The Run For A Million was no longer reverie but a reality. Game on!

Yellowstone superstar and Run For A Million $100,000 Open 3rd place getter, Lil Joe Cash was a Major sponsor of the Reining Australia Gold Buckle Futurity and National Show. His generous owner Russell Giles joined us in Tamworth in September and his talented progeny are springing up around the country with many delighted owners. Watch out for the Lil Joe’s hitting the Australian show pens in the years ahead.

Incidentally, Taylor Sheridan, has been named as the Inaugural NRHA Reiner of the Year. Seems a fitting recipient for an award designed to honour the person or entity who enacts a measurable positive influence on the industry. Sheridan will be recognised at the Hall of Fame Dinner to be held December 4 in Oklahoma City, and will be covered by APHM.

They may be right at home in the Reining Pen, but it was a different experience for high profile The Run For A Million riders as they graced the red carpet and were besieged by fans that literally qued for hours to meet them and have their merchandise signed. Not that it took long for their true characters to emerge again. With an infectious grin and his signature sense of humour, Casey Deary, had no problem delaying the ques. He put his artistic talents on display as he ‘enhanced’ promotional material featuring friend Craig Schmersal. Nothing like a gold mullet, a texta moustache and a blacked-out tooth to keep one of the most successful riders on the circuit well grounded.

There was a buzz amongst the crowd, excitement and anticipation as the que edged them towards their idols and the clock ticked closer to the start time of the richest event in Reining history. This was more Hollywood than Horseshow but it was hard not to ride the wave of enthusiasm and fill with pride for the sport this author fell in love with years ago. Reining devotees and the simply curious or inspired from around the globe had converged on Las Vegas. Russia, Australia, Canada, New Zealand, Germany, Italy, Chile and France. Just some of the home countries of fans that crossed our path and stood in that que.

There was also a sweet but strong presence of a very specific type of fan. The profile; female, many young, most in pink and generally clutching a poster while wearing a cap or t-shirt with a distinctive ‘A’. Abby Lengel fans were there in droves. “Man, Abby has had more cuddles today than a stuffed Panda”, joked one of her confidants as she recounted how the experience had been for them that day. As the only female rider and one of the youngest in the field, like it or not, Abby was on a pedestal. She and Sandy Bentien’s buckskin Ace (Gotta Twist It Up) carried the hearts of wide eyed little girls and their older “go give it to ‘em girl” carers with them down the chute and into the pen.

It’s hard to imagine that just 3,000 people could make noise and raise the roof the way the Run For A Million crowd did as NRHA $6m rider Shawn Flarida set the Southpoint Casino Arena alight. Laying down an impressive 228 on the delightful Spooks Gotta Spark. Sparky is full of talent but adored by those who know him best for a temperament as sweet as his manoeuvres. The challenge had been set. Chase that! And chase they did.

Shawn was followed by Cade McCutcheon, the young gun with plenty to prove and nothing to lose. Custom Made Gun (Standing at Cardinal Ranch) didn’t let him down and again the crowd was on their feet and all knew they were witness to something special. Mum, Mandy McCutcheon’s distinctive piercing whistle, globally recognised by Reining enthusiasts, had finally met its match and was barely audible over the crowd. There was no preserving their horses for the next run. This was it, all the training, all the hours of working on their relationship were being showcased at maximum throttle. 229.5! We had a new leader after just the second run.

You couldn’t help but chuckle as the announcer called in his slow, deep voice with the strong American accent that we hear via the livestream at all hours of the night in Australia … “Drag time. After the drag will be Andrea Fappani”. The luck of the draw was in Andrea’s favour again, falling in a way that could not have been scripted better by producers of ‘The Last Cowboy’. A theme of the ‘The Last Cowboy’ was Fappani’s uncanny luck at scoring a draw straight after the drag, fresh dirt being viewed as an advantage. The final episode, the final event, fresh dirt - of course.

Each competitor had a short list of horses, from which they would select one on whom to compete. The suspense only relieved as they ran in and their horse was revealed to the tantilized crowd. Enter the stunning palomino and crowd favourite Platinum Vintage. With over $233k + LTE to his name, a $5m NRHA rider on his back and his half-brother, A Vintage Smoke laying down a 226.5 for Jason Vanlandingham moments earlier, Platimun Vintage and Fappani had the crowd on their feet yet again. Magnificent - 229. They had missed glory by less than a point.

Youth rider, Addisyn Schmersal on Cashing Black Chex had taken out the Rookie title earlier in the week on a 216. Draw 8, proud Dad and Ginger’s affectionately named trophy husband Craig, was leaving the event a winner already. Not to be outshone by his daughter, Craig piloted No Smoking Required to a 229.5 and was sharing the lead with Cade McHutcheon.

Casey Deary, Abby Lengel and Tom McCutcheon laid it out there, falling just short with runs that were marking scores worthy of Championship titles on any other stage.

Third highest LTE rider and mounted on the highest earning horse, Jordan Larson was last into the arena and was a contender. If Cade and Craig were starting to allow the thought of victory into their minds Jordan Larson would certainly have adjusted that attitude. ARC Gunnabeabigstar attacked the pattern with a commitment that from the stands was certainly a stand out performance. Circling with speed, precision and a high degree of difficulty. Clean, sharp spins and the crowd getting louder and louder. Heading into the run downs it was arguably Jordan’s to lose. As they rounded the top of the arena into the second stop of the pattern it was clear things were about to take a change for the worse. Bigstar gave his all that night but with too much enthusiasm to get to the stops, the win was lost. Craig and Cade were to be the victors. In the measure of a true sportsman, Larson, patted his horse and acknowledged the crowd, leaving the arena with the respect and admiration of those who bore witness.

Run Off? Not This Time

Some may argue that the dollars at stake were too high for the victors to risk a run-off and this was a contributing factor to the decision to Co-Champion. Some speculate McCutcheon and Schmersal went against the terms of their contracts by not running off. In the end, respect for the horse was the reason. Custom Made Gun and No Smoking Required had given both men exceptional runs and asking for more would not have served sport or steed well. With animal welfare, appropriately on the forefront of people’s minds, the NRHA operates on the mandate of ‘Respect the Horse, Respect the sport’ and this choice personified the rhetoric.

Although we sat in the stands anticipating the ultimate final show down, no one seemed to begrudge but rather celebrated Taylor Sheridan’s announcement …… “Presenting Co-Champions Cade McCutcheon and Craig Schmersal”.

So why was The Run For A Million such a success? It could be argued it was a culmination of factors. The coming together of commercial minds, marketing experience and a hefty budget. Without doubt. But perhaps a large proportion of the events success has to be attributed to authenticity. Taylor Sheridan genuinely believes in the sport and the concept, Amanda Brumely genuinely wants to produce high quality events improving the experience for all involved, the NRHA genuinely wants to showcase Reining and the crowd was genuinely fascinated and inspired by the beautiful and talented quarter horses before them.

The usual rules and regulations surrounding an NRHA sanctioned event were massaged just a little. Removal of age restrictions saw the gathering of the finest Reining horses available. Some like Lil Joe Cash and Platinum Vintage had not been shown for some years and suddenly they were back in the spotlight. Valued and celebrated by the people that know them best. The standard go-rounds and lengthy entry numbers of an NRHA major were reduced leaving only the best of the best. This was a highly concentrated hit of Reining awesomeness, spellbinding for the new and plain old fun for the well initiated. An invigorating addition to the history and regulation on which Reining is based. It was a shameless celebration of the horse and the sport. And one not to be missed in 2020!

2019 Run For A Million Results 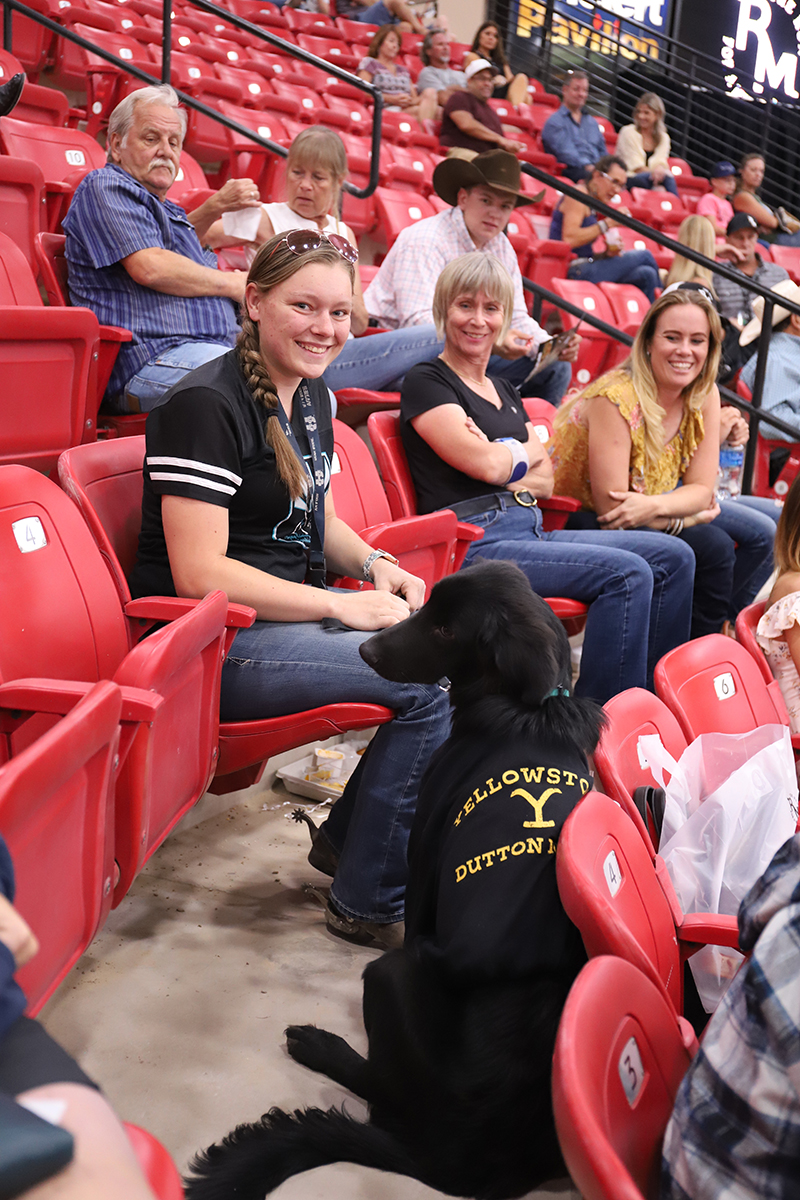 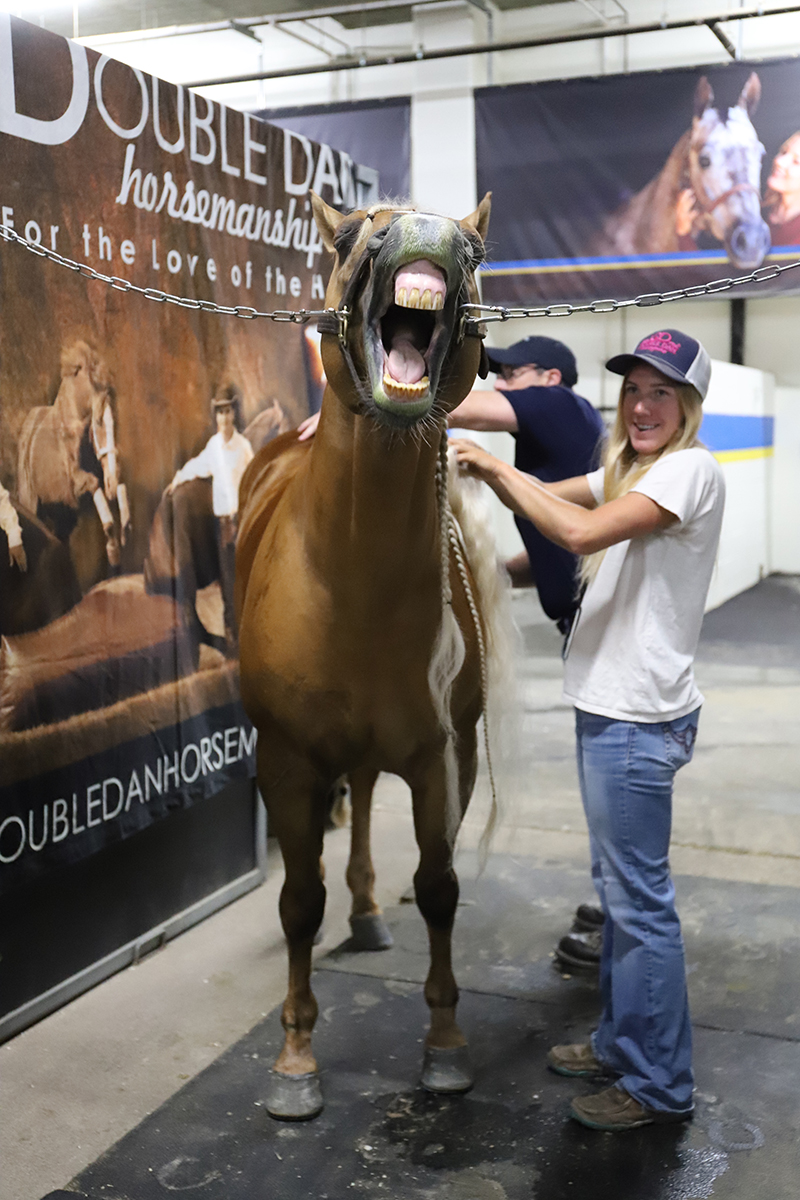 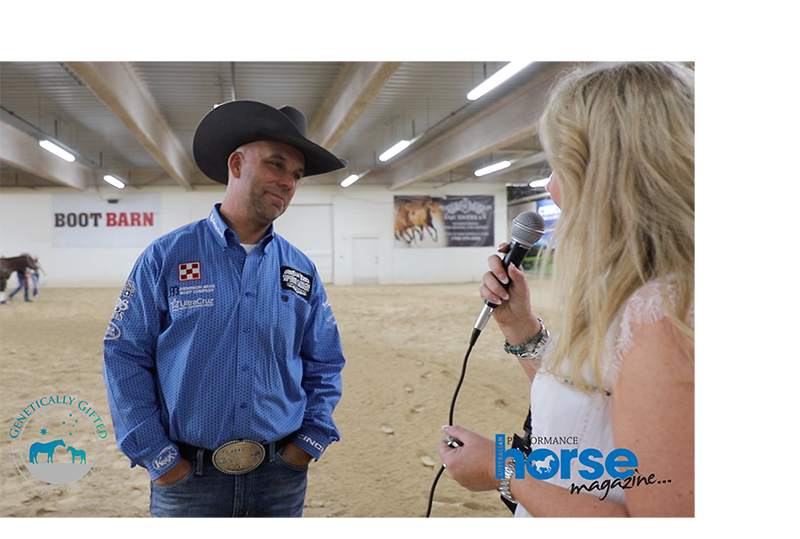 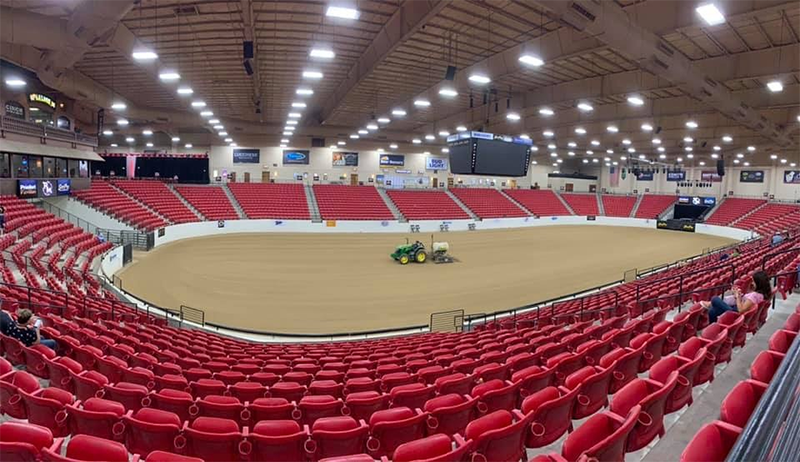 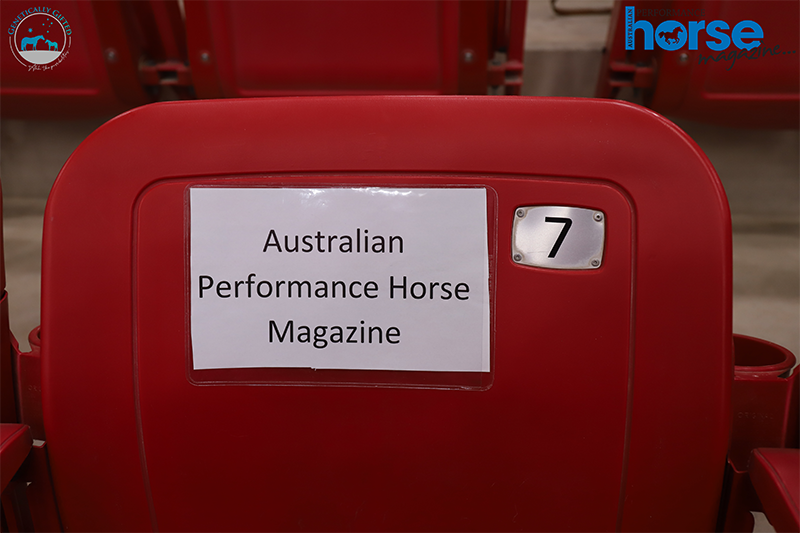 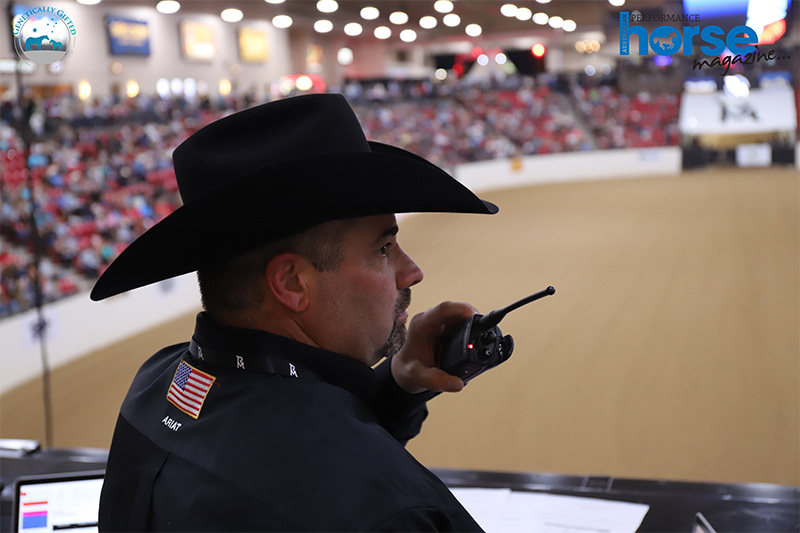 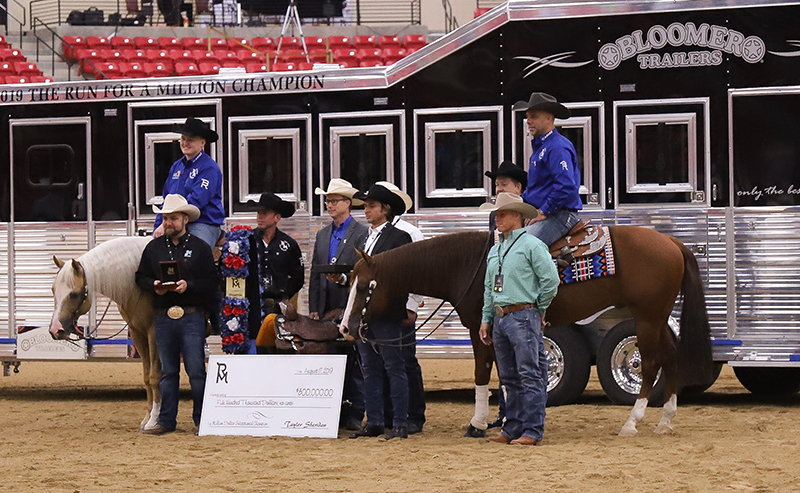 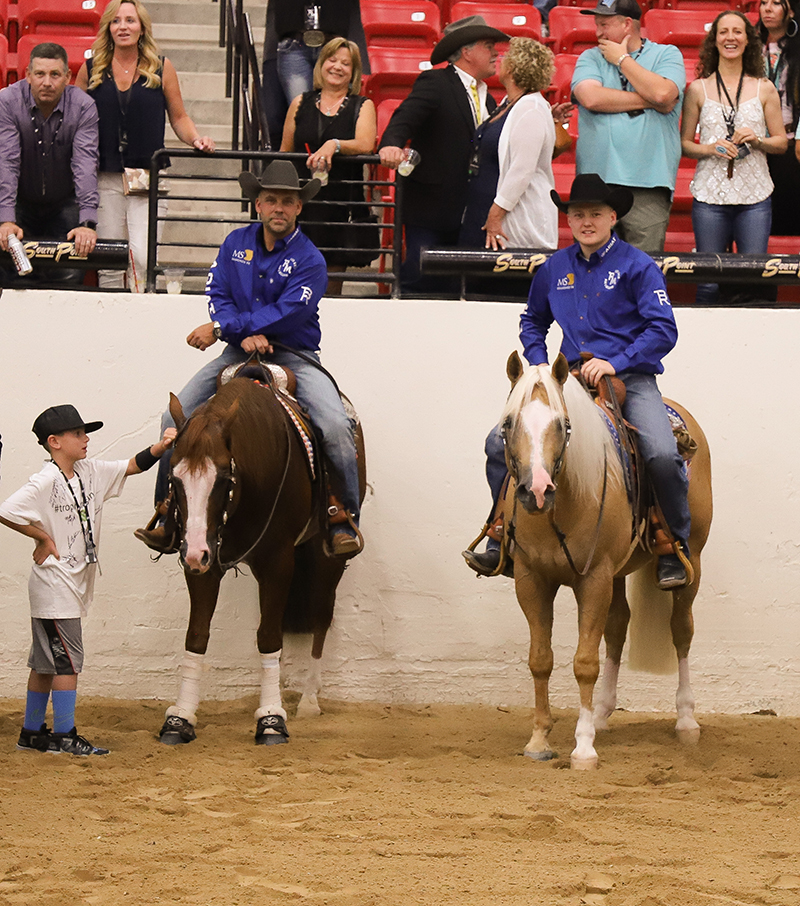 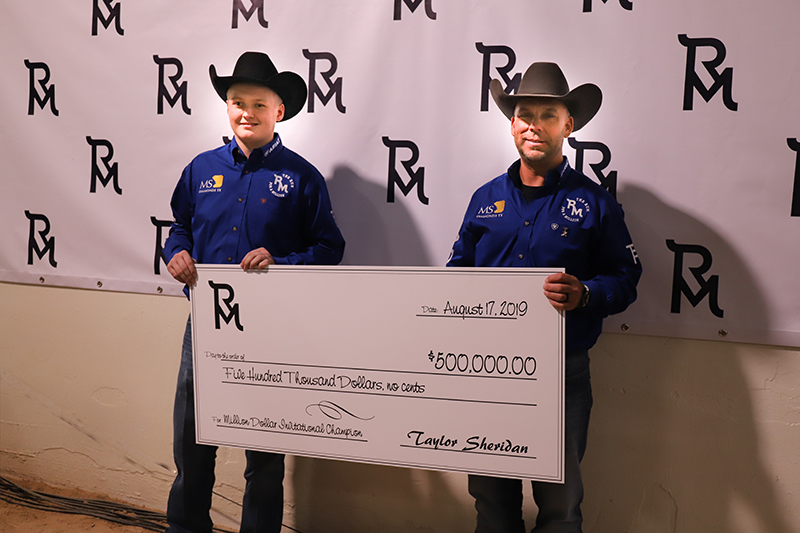 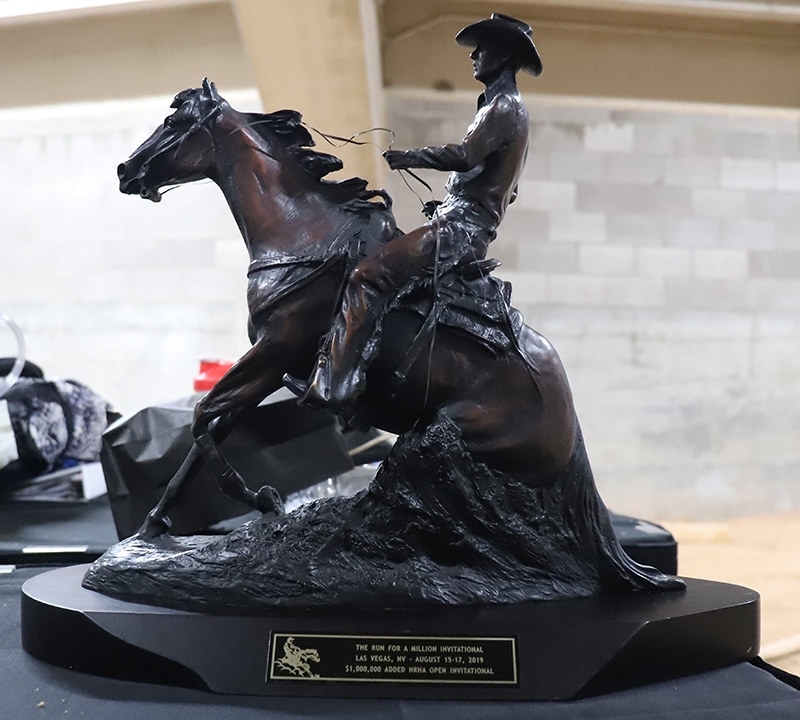 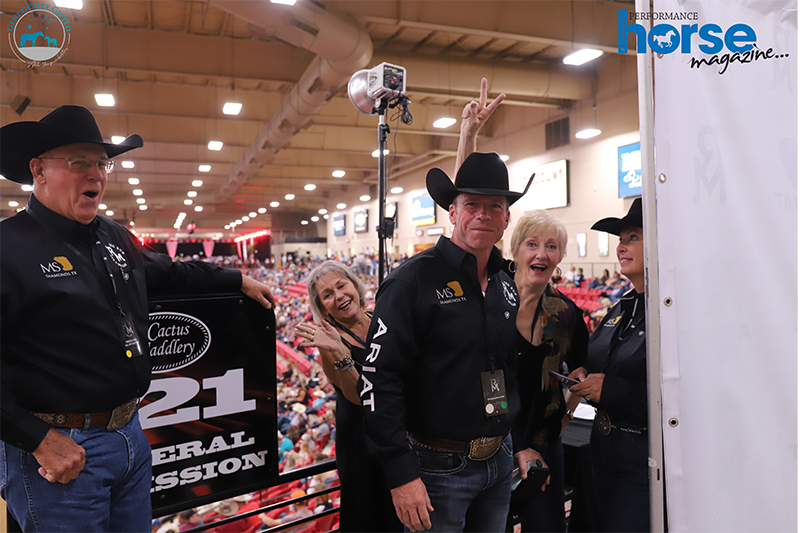 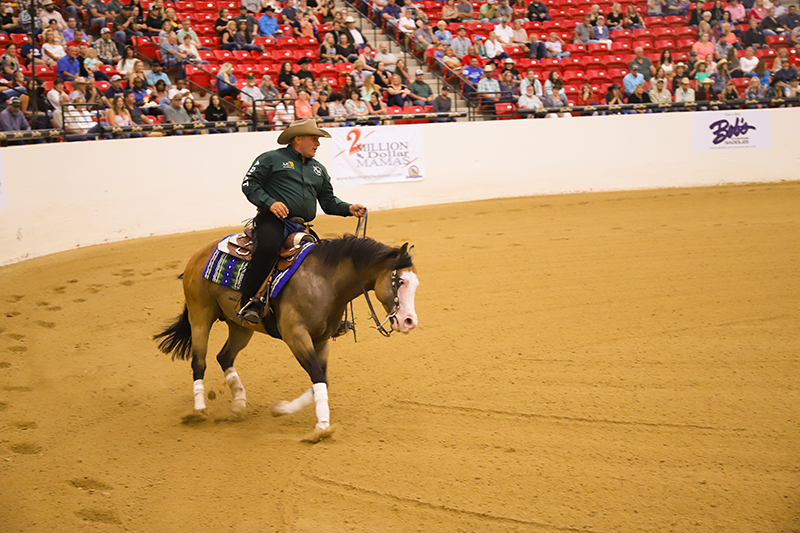 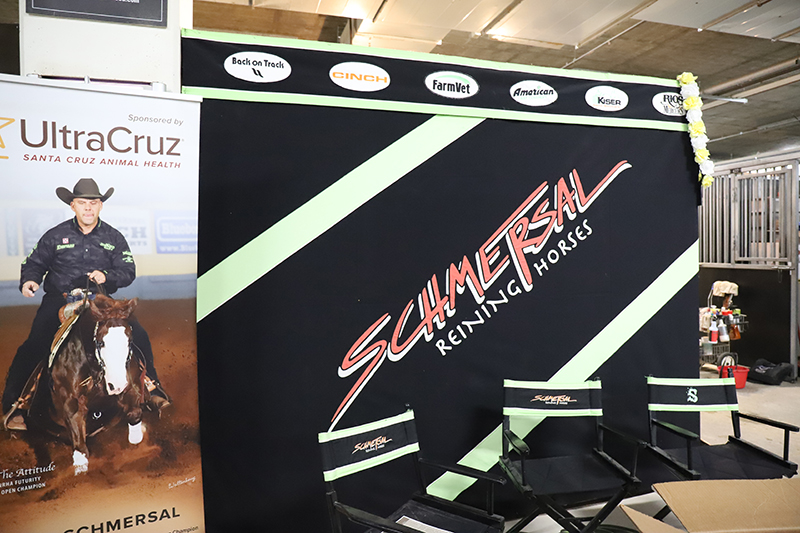 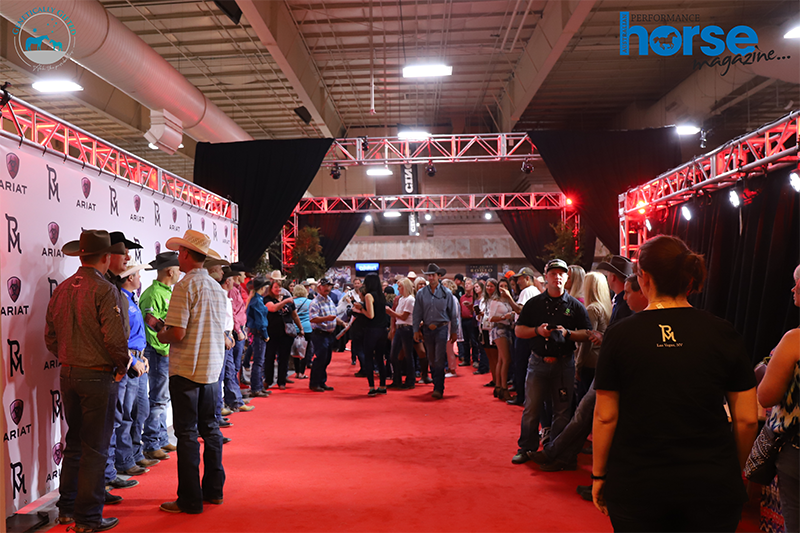 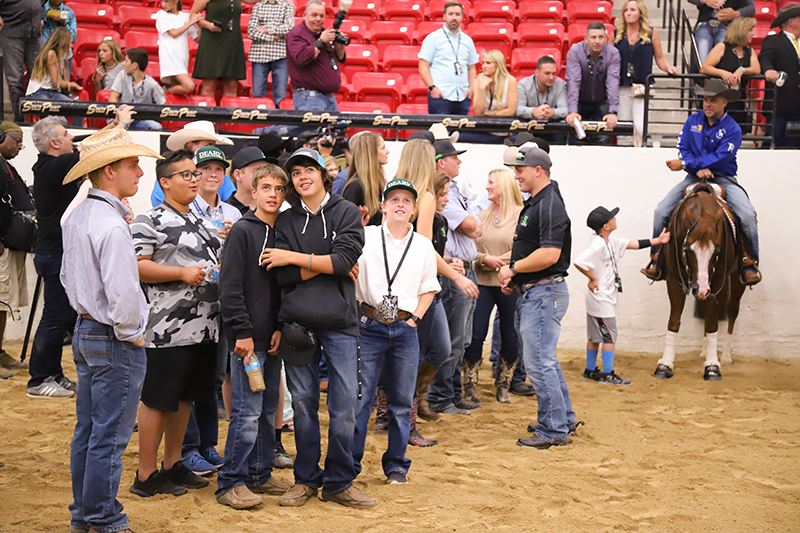 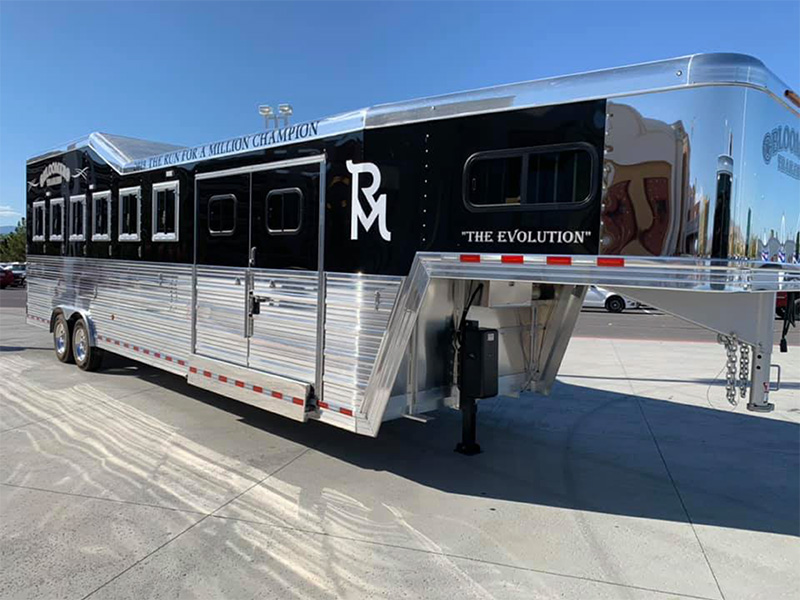 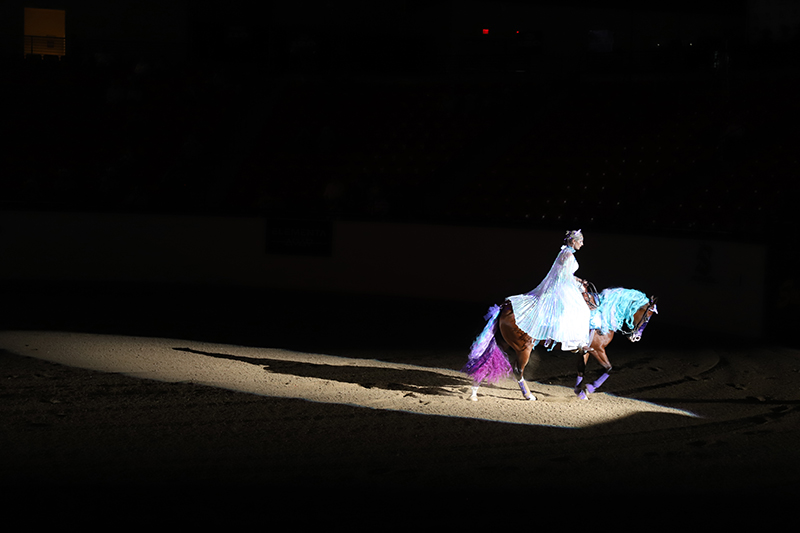 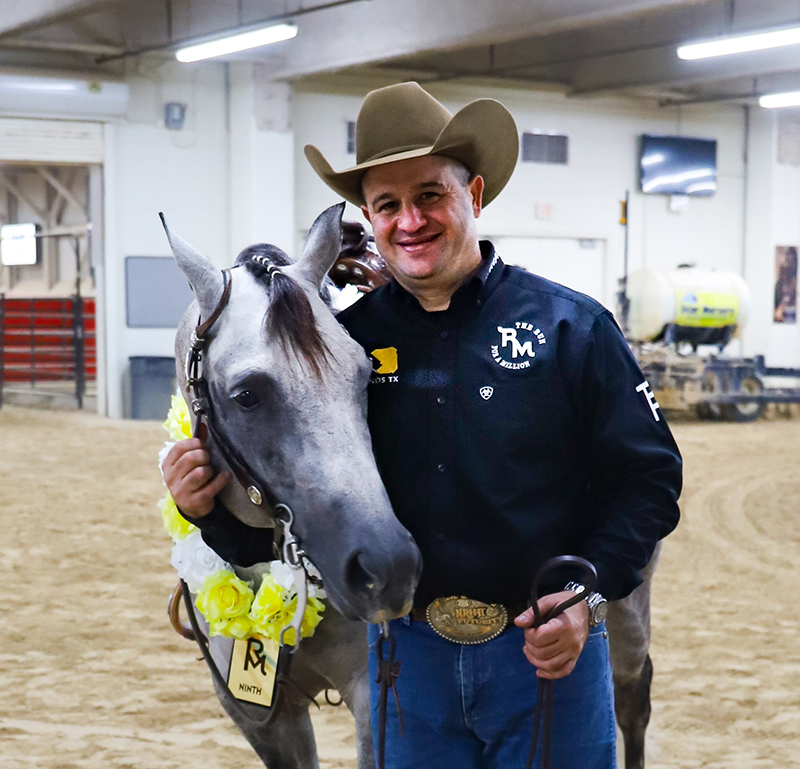 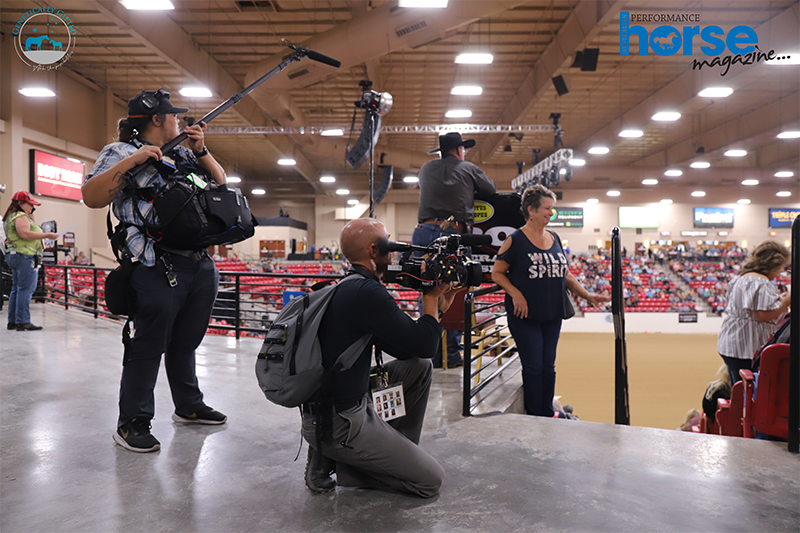 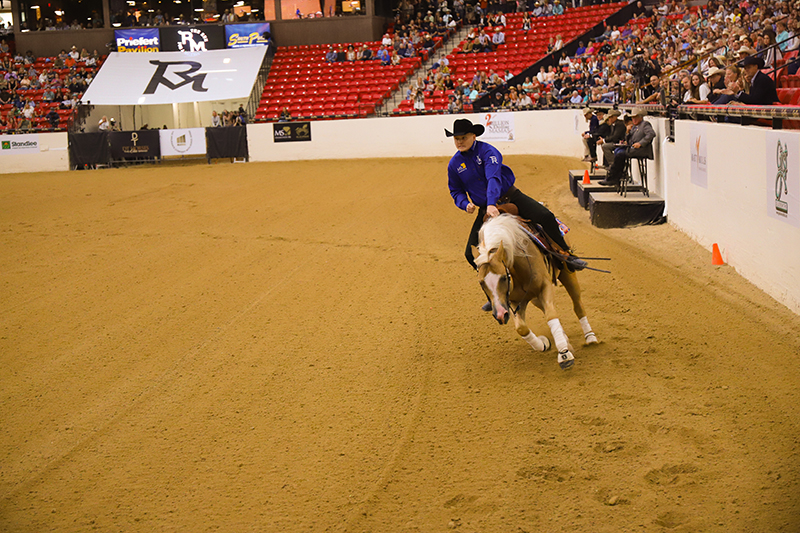 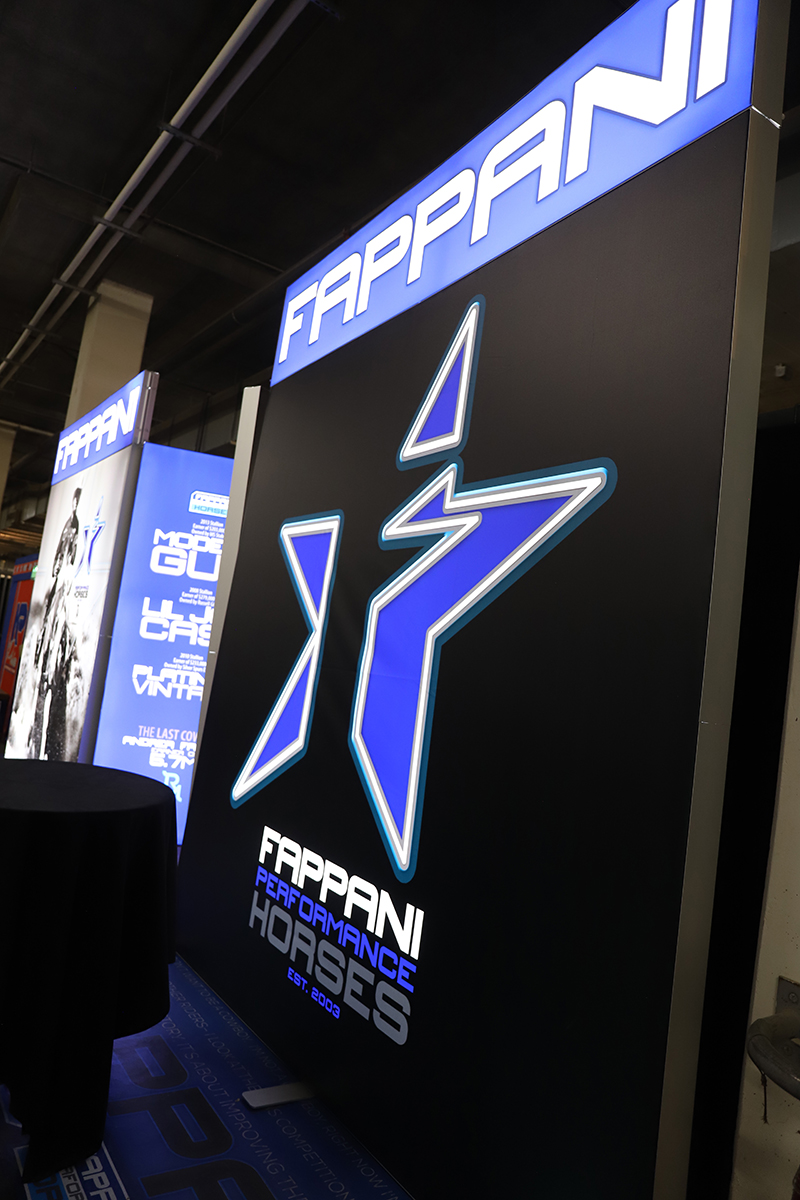 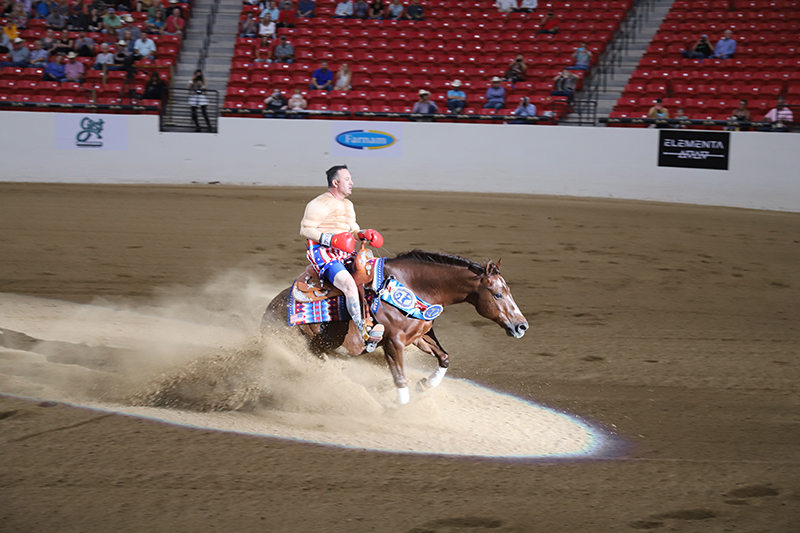 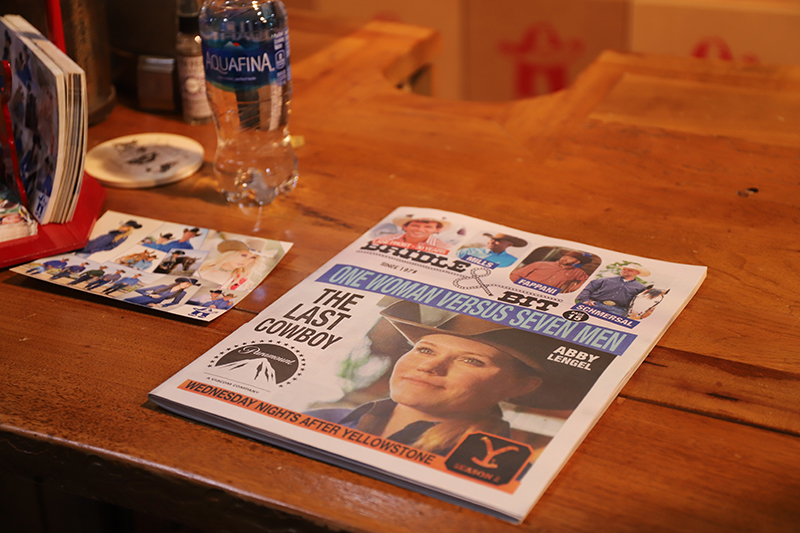 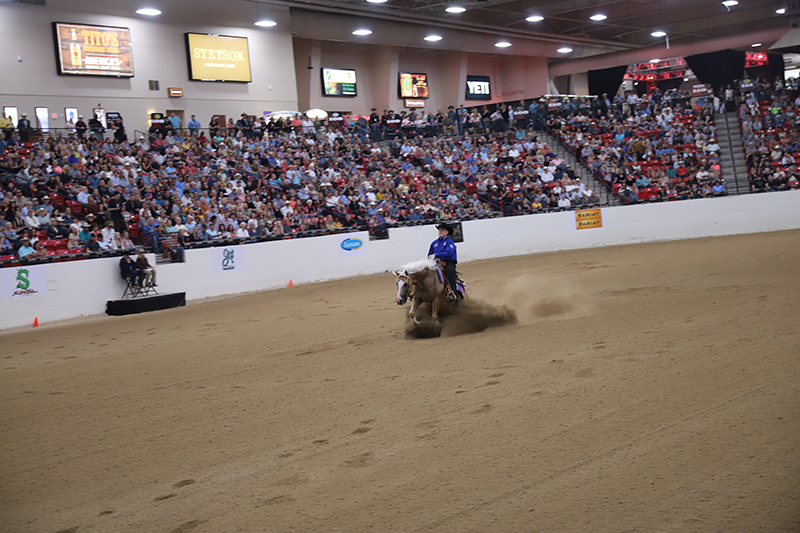 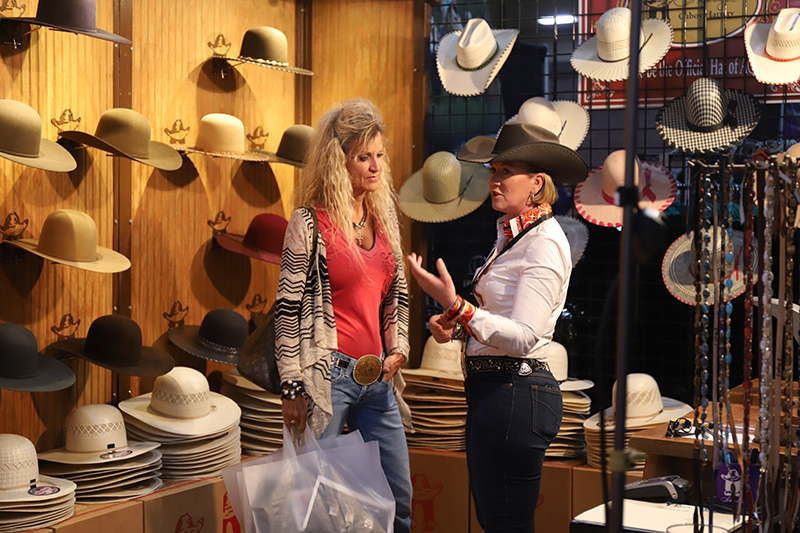 Want some more of the Reining action? Here’s how.

Gain some global insight into the Reining world listening to Andrea Fappani’s Podcast Series Along For The Ride at https://fappaniperformance.com/podcasts/

The World’s best Reining shows are generally livestreamed free of charge. The Global Reining Livestream Club, centralises over 40 Reining shows from around the globe in one location with current livestream links.

Anyone is welcome to sign up for the free notification service delivering show links and Australia Eastern Standard schedule directly to your phone or email courtesy of Genetically Gifted. Register at https://www.geneticallygifted.com.au/reining-livestream-hub.

Karen Callinan is the founding owner of Genetically Gifted. She and her daughter compete at most major Reining events in Australia and enjoy riding and breeding Reining horses. Karen travelled to the United States to cover all the action from the Run For A Million in 2019 and will be returning for the NRHA Futurity next month in Oklahoma City. Karen enjoys actively promoting and participating in the sport of Reining and advocates to make Reining and Reining horses as accessible to as many people as possible.